Do you know how the 9/11 terrorist attacks changed skyscrapers forever? What about the story of how a visual language saved its designers’ lives? The signs that warn us of danger and keep us safe may not look glamorous but they have fascinating backstories. Here are four fascinating facts about safety signs:

A lack of safety standards and poor visual communications made work in steel mills incredibly dangerous at the turn of the century. Steelmaking was hazardous work for trained professionals who could understand instructions, let alone untrained immigrants who couldn’t speak or read English. From 1906 to 1910, the accident rates for immigrants at the South Works steel mill were double those for English speakers. Journalists helped expose the terrible working conditions for all factory workers helped spur the Progressive Movement which led to reforms in the workplace (including safety signage using symbols). The first publication about the importance of safety signage dates back to a pamphlet titled, “Signs and Slogans” published in 1914.

2. Isotype images helped save the lives of its designers

Viennese intellectuals Otto Neurath, Marie Reidemeister and Gerd Arntz, created a visual language to communicate statistics for the Social and Economic Museum of Vienna, Austria. These images became known as the International System of Typographic Picture Education or “Isotype”. Isotype became so popular that government organizations and other museums from across the world commissioned the museum to create charts and graphs and foreign offices were set up in Berlin, The Hague, London and New York. When Fascism took over Austria in 1934 Neurath, Reidmeister and Arntz fled to their office in The Hague to escape persecution. If they hadn’t had contacts outside of Austria it’s likely they wouldn’t have survived the war.

Henry Dreyfuss was a prolific designer who applied his skills to a huge range of projects. He was responsible for some of the most iconic industrial designs of the 20th century including the “Princess” telephone, the Mercury train, the folding Polaroid Camera, and the circular wall thermostat. Dreyfuss advocated for using symbols instead of words on industrial machinery to make controls safer and more universally understood. He eventually compiled these designs into the Symbol Sourcebook, which became a bible of symbols for designers to make products and signage more universally understood. We still use Dreyfuss’ symbols for men’s and women’s bathrooms, airports and a martini glass leading to the bar today.

4. The 9/11 terrorist attacks led to glow in the dark stairwells 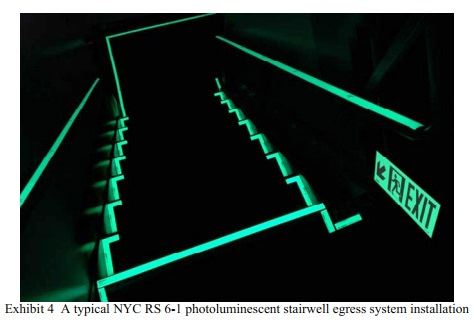 The 9/11 tragedy was senseless and terrible, but lessons taken from the evacuation of the Twin Towers has led to safer skyscrapers. In 2003 the New York City World Trade Center Taskforce (a panel of experts appointed by the Major of New York City) issued their report aimed at making high rise commercial buildings safer. The first of these new requirements to be met by building owners was the mandatory installation of photoluminescent wayfinding systems in the stairwells of all commercial buildings over 75 feet tall. Photoluminescent (or “glow in the dark”) safety signs allow people to follow evacuation routes even when the power is out.