Three FASTSIGNS Centers Giving Back in Their Communities

Martin Luther King once said, “Everybody can be great, because anybody can serve. You don't have to have a college degree to serve. You don't have to make your subject and verb agree to serve. You only need a heart full of grace.” We have so many in the FASTSIGNS family that are active in their communities, and to help spread some good news and encourage others, we wanted to highlight three goodwill stories to raise your hopes and lift your spirits as we look to the future.

In 2020, FASTSIGNS of Lancaster used their business as a platform for positive change for restaurant clients in need of outdoor dining setup. When the mandatory government shutdowns began, the team at FASTSIGNS was concerned about how their customers were managing.

Bistro Barberet & Bakery, along with other local restaurants were struggling to keep their businesses up and running. For Cedric Barberet, owner at Bistro Barberet & Bakery, this time should have been one of celebration and a boost to market the business, since he had won Chopped Sweets on the Food Network. So Angela Allison and the team at FASTSIGNS of Lancaster joined in an effort to help keep them customer-facing and provide some type of dining experience. 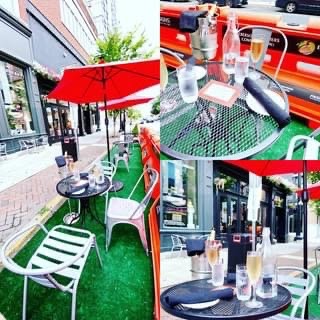 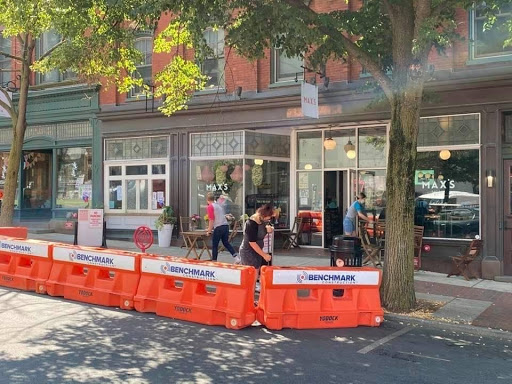 After an emotional conversation with Cedric and Estelle, Angela immediately went to work to acquire a parking permit and barricades for the outdoor bistro. Angela was determined to find a way, if she had to pay for it herself. She emailed and called clients and asked for financial assistance through a sponsorship structure. She also called construction companies in addition to filing the permits. Shortly after, Angela shared with Cedric & Estelle that FASTSIGNS had found a way to sponsor their outdoor seating and it would be ready that week. FASTSIGNS then created graphics with their logo and the sponsors’ logos and applied them to the barricades.

The original goal of the project was to assist one client restaurant with one month of seating so that they could generate revenue without the added expense of barricade rental and parking permit fees. Not only was the first month entirely donated, more clients contributed to keep their barricade bistro initiative 100% funded through October 31. The FASTSIGNS team ultimately assisted with three other outdoor cafes.

“By splitting our Employee Holiday Gift Basket budget between eight local small businesses, we helped keep them operating for another month without having to lay off staff or shut down,” said Coyle. 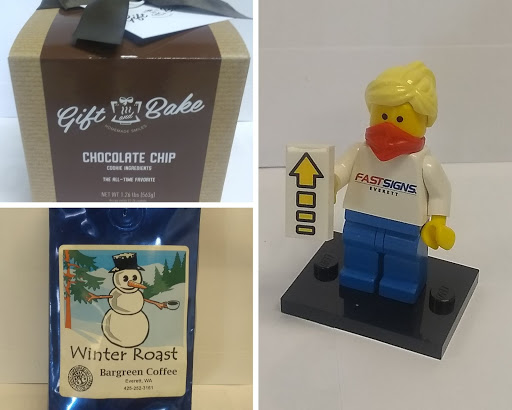 Tracy also contacted the Economic Alliance of Snohomish County to see if there was a way to set up a website that all of the small businesses could add themselves to, so information could be in one easy-to-find place online for customers and businesses. By the end of November, a dedicated website was established, called www.SupportSnoCo.com, with money from the Cares Act. This centralized site enabled customers and businesses to find information and continue to purchase locally.

“I did this because of the overwhelming gratitude and responses I received back from all of the small business owners, who desperately needed help in our community,” said Coyle. “They were thrilled and so very grateful that we went the extra mile and highlighted their struggles with local governments and organizations.”

After the project was completed, the Economic Alliance of Snohomish County asked FASTSIGNS to share their giveback story which was sent out in their weekly digital newsletter on Dec 3 to encourage other businesses to do the same. FASTSIGNS mentioned the names of all 8 businesses in the newsletter story to get them some exposure and to thank them.

The team at FASTSIGNS of Olympia, WA-Lacey is closely involved with the Homeless Backpacks organization. They spend time filling bags and packing lunches for them, have used their center location as a dropoff point for specified foods, have donated profits from sign orders to Homeless Backpacks and also donated items for auctions and cash donations, and also assisted in preparation for their weekly deliveries to the children. Since March of 2020, the demand of students in need has gone from 600 to 1,500. FASTSIGNS has been recognized as a leader within the Homeless Backpacks organization for their efforts as they help meet the organization's weekly monetary demands for food.

Grace Kendall, franchisee at FASTSIGNS of Olympia, WA-Lacey, has personally known the founder of Homeless Backpacks, Kelly Wilson, for over ten years. Grace has also been a former board member of Homeless Backpacks. As the Business Awards chair for the Lacey South Sound Chamber, Grace awarded Kelly the Angel Award in 2019 for sponsorship appreciation for being the most giving and gracious leader.

“We have been privileged to give back to those in our community during the pandemic,” said Grace Kendall. “We also encouraged our FASTSIGNS team member families and friends to get involved as well as the Gateway Rotary Club. When a community comes together for good, we can do amazing things.”

Homeless Backpacks started as an organization to help the homeless in the community but later shifted their focus to the homeless students in Thurston County. The founder, Kelly Wilson, recognized that students who were unable to eat led to them losing focus in classes and later dropping out of school. Their mission is to end the cycle of homelessness one student at a time. To learn more about Homeless Backpacks, watch a short video at the link here. 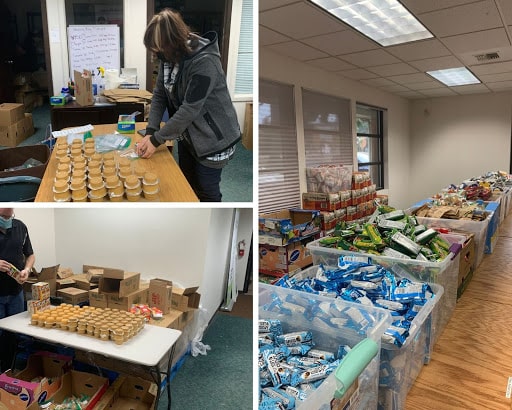 Together, We Can Make a Difference:

As members and businesses in local communities, the FASTSIGNS network of independently owned and operated centers are involved with and serve in a variety of business and charitable organizations. Each location’s charitable endeavors and participation is diverse as their local community.

“We know that FASTSIGNS franchisees are people who care about people.  We are proud of the ways that they serve their local communities and we look forward to expanding this initiative in the years ahead”, said Catherine Monson, CEO of FASTSIGNS International, Inc.

Are you a business owner or a student and wanting to make a difference in 2021? How can you serve those around you through an organization, school, church or group? We hope these stories have inspired you to get involved in your own way this year. It’s never too late to start!