How to Enhance the Customer Experience Using Augmented Reality

How is your business or organization investing in and improving on the customer experience?

FASTSIGNS is already contributing to the philosophy of helping companies improve user experience by providing high-quality signs and visual graphics to customers. The next stage is to enhance those same signs with augmented reality.

FASTSIGNS® of Fullerton, CA is a pioneer among the FASTSIGNS franchise network when it comes to providing augmented reality as part of a sign and graphics offering. Read about three customers FASTSIGNS has provided augmented reality solutions to: McCoy Mills Ford, Fullerton School District and California State University – Fullerton. 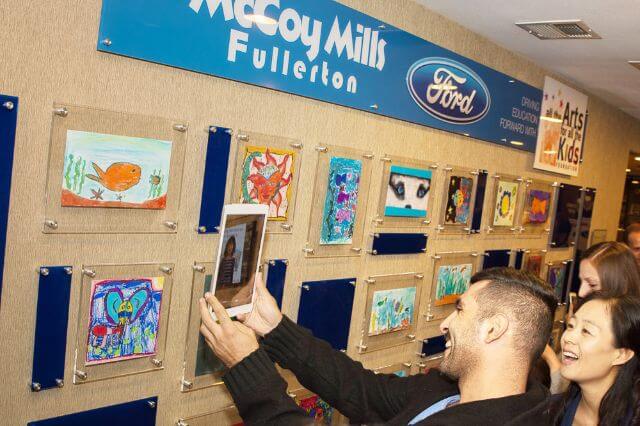 Our first project integrating augmented reality was for McCoy Mills Ford, a local car dealership and service center. The dealership contacted FASTSIGNS wanting to update their interior spaces. During the consultation, FASTSIGNS® of Fullerton, CA owner, Gaby Mullinax, noticed a slightly askew banner announcing, “McCoy Mills Ford – Driving Education Forward – In Support of All the Arts for All the Kids Foundation.”

“The first things I did was ask the dealership General Manager how committed he was to the Arts Foundation and he replied, ‘very’.” said Gaby. “I explained my vision for a beautiful permanent, but interchangeable, art gallery wall that would enhance his branding while also serving as a community showcase. He immediately said yes, so I went back to my center and began designing it.” 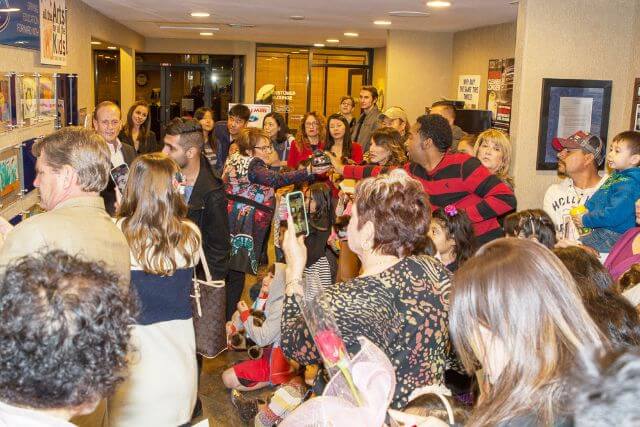 It wasn’t long after the wall mural went up before the augmented reality component was added. Gaby met local representatives from Live Portrait (augmented reality application) and she knew the wall could go to the next level of user experience.

“When I first starting talking to them [Live Portrait developers], they were promoting their capabilities of selling augmented reality in yearbooks or ‘live yearbooks.’ During the conversation, they kept talking about live photos and how Apple was telling developers that photos needed to move. That’s when it clicked.”

Gaby brought the idea back to McCoy Mills Ford and they thought it was a great idea. After working with the Fullerton School District on gathering parental consent, FASTSIGNS installed the wall in the dealership service center. Now whenever a person visits the McCoy Mills Ford service center, they are prompted to download the Live Portrait application. When they hold their mobile device over any of the artwork displayed a short video shows a student talking about their specific piece. The invoice for this project was $7,000 with 15% of the profit margin coming directly from the augmented reality component. After the McCoy Mills Ford project was completed, they held a special after-hours networking function to unveil the wall to the Fullerton community. With the local buzz around town about the wall, the Fullerton School District wanted to do the same concept in their office.

The Fullerton School District office is a high traffic facility with many visitors and employees coming and going each day. When the district heard about the way the McCoy Mills Ford project was received and the exposure many of their students were receiving for the artwork, they asked FASTSIGNS to install the same wall at their offices. The school district even went to the lengths of equipping their reception area with two tablets with the augmented reality application. Now, when they have visitors in the waiting area, they proactively give them one of the tablets and have them experience the wall for themselves. Not only does this get more attention for the wall and its content, it helps alleviate the potential frustration due to wait times. Since the installation of the wall mural, the Fullerton School District’s Risk Management department sought out FASTSIGNS to do another augmented reality solution.

One of the Fullerton School District’s waiting room visitors, a parent, is also the Interim Director of Outreach, Recruitment and Orientation at California State University – Fullerton. She contacted Gaby and her FASTSIGNS® of Fullerton, CA team to provide a similar experience, tailored for a specific audience. The Interim Director needed guidance and consultation from the Fullerton center on how to make a bigger and better impression on prospective students and families coming to their office during college campus tours. The department was looking for an exterior wall solution that would illustrate the many departments, athletic teams, art programs and the story of the university that could be easily accessible at any time of day for any visitor wanting to see it. FASTSIGNS® of Fullerton, CA’s solution included a dye sublimated metal wall mural with augmented reality integrated within it. When a visitor places a mobile device over the wall, they see the video displaying various aspects of the university.

Technology and customized user experience continues to become an everyday expectation—and FASTSIGNS can help. For more information on these projects or to find out how FASTSIGNS® of Fullerton, CA can provide an augmented reality component to your visual marketing, call (714) 462-1910 or visit www.fastsigns.com/2140.