The romance and adventure of a road trip holds a special place in American culture. From Kerouac’s On the Road to “Get Your Kicks on Route 66” to “Thelma and Louise”, the idea of taking off on the open road sparks flights of imagination and an endless sense of possibility. Of course, for many of us it also brings back memories of long, sweaty hours in the back of a station wagon. Regardless of whether the trip was sublime or sublimely boring, seeing these highways signs is a certain indicator that you’re participating in the Grand American Tradition of taking a road trip. Here are our picks for 4 Classic Road Trip Signs:

This icon marks the southern end of the Las Vegas Strip and is featured in nearly every film about trekking to Vegas, from “Viva Las Vegas” to “The Hangover”. Betty Willis designed the classic sign in 1959 in the characteristic style of the Googie architecture movement. She never copyrighted the design because she wanted it to be a gift to the city and today it’s ubiquitous on Vegas souvenirs. The front of the sign is more famous, but road trippers leaving Las Vegas know the back encourages them to “Drive Carefully, Come Back Soon”.

You know you’re in Nevada when…a 63-foot tall neon cowboy welcomes you to town. Wendover Will is a classic icon of the American West. The Stateline Casino commissioned Pat Denner to create Will in 1952. Denner had just completed the Vegas Vic sign and casino ownership wanted a highly-visible sign that would draw motorists in from US Highways 40 and 50 (now Interstate 80). 1,184 feet of neon tubing later they had one tall drink of water. Named after the town of Wendover and Stateline casino-founder William Smith, Wendover Will is now city property and a Guinness Book of Records holder as the “World’s Largest Mechanical Cowboy”. 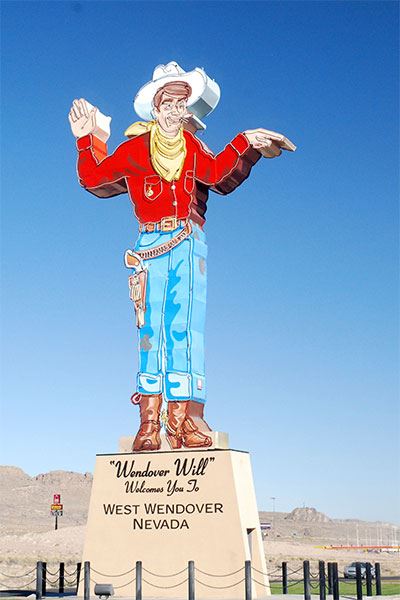 Good luck driving Interstate 90 from Minnesota to Montana without seeing a Wall Drug sign. These billboards scattered throughout South Dakota give road-trippers constant reminders of how far it is until they reach this sprawling tourist attraction of shops and restaurants. While it currently takes in more than $10 million a year, Wall Drug’s beginnings were much less auspicious. In 1931 Ted Hustead moved to a small town 60 miles east of Mount Rushmore to establish a pharmacy. Business was terrible until his enterprising wife Dorothy thought to advertise free ice water to travelers as they came down the road to town on highway signs. In 1981 Wall Drug claimed it gave away 20,000 cups of water a day during peak tourist season. Today road trippers on I-90 will see approximately $400,000 worth of billboards for Wall Drug on their way through the northern Midwest. 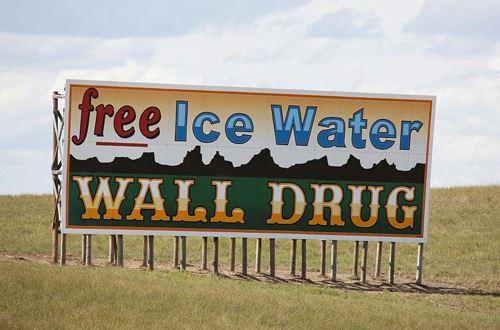 Finally, Route 66 signs may be the ultimate symbol of the American road trip. Also known as the Will Rogers Highway or the Mother Road, the route was originally conceived as a 2,448-mile artery between Chicago and Los Angeles. Route 66 highway signs remain a symbol of the American drive westward, from Okies fleeing the Dust Bowl to the beat generation migrating from New York to LA, to today’s road trippers looking for a piece of American history glamorized by pop culture phenomenons like “Easy Rider”and Disney-Pixar’s “Cars”. Even though increased infrastructure in the highway system has taken away the necessity of this two-lane road, road trippers looking for a kick can still drive about 85% of the original Route 66. 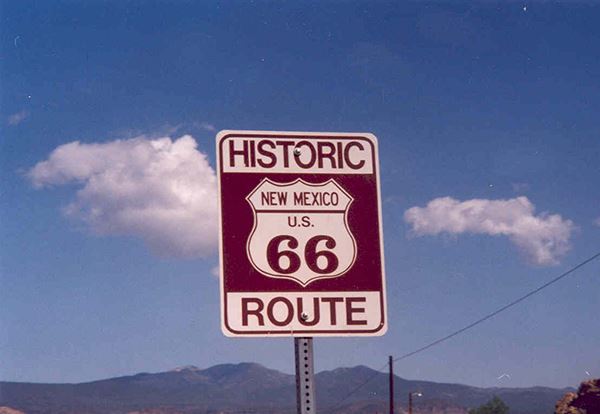